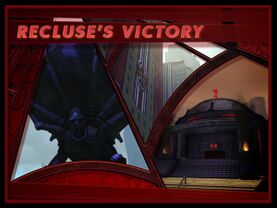 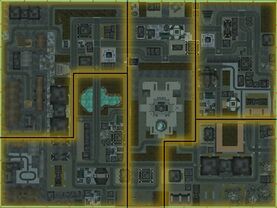 Recluse's Victory is the highest-level of the four PvP zones.

For decades, Lord Recluse has been plotting to destroy Statesman. He has been using captured D.A.T.A. and Portal Corp. scientists’ time technology to create a Destiny Portal—a portal that can travel to alternate futures. Tweaked by Dr. Aeon and perfected by his Mu Mystics, the Destiny Portal has allowed the Spider Lord to experiment with the time stream, visiting alternate timelines of Atlas Park, with hopes of domination.

After extensive research, an alternate, larger, temporal portal was built. This portal’s signal locks on to a specific thread in the time stream, one where Recluse has gained a foothold into this world. Arachnos’s control is maintained through various Temporal Anchors throughout Atlas Park. But Lord Recluse is opposed by Longbow and heroes, so the timeline is not permanently set on either good or evil.

If successful, Recluse’s Victory will create a “butterfly effect,” changing the time continuum of today and bringing the defeat of Statesman and the Freedom Phalanx.

The only thing holding Lord Recluse back from his dream is that the temporal anchors, pillbox-like structures with turret defense systems, will not stay locked down long enough to keep the timeline frozen for more than a few minutes at a time.

In recent months, Freedom Corps operatives, through great sacrifice on the beaches and in the under city of Grandville, have learned about the temporal portal and have rescued captured scientists that Lord Recluse used to build and maintain it. These scientists brought with them schematics of the portal and the knowledge of how it was being used. The scientists told how they constructed the temporal anchors with built-in reset buttons that would not let Lord Recluse maintain his dream. They are not sure, but they think that the reset system can be overridden if the temporal anchors are locked into one timeline or another long enough.

The Freedom Corps knew it had to act. With the aid of D.A.T.A. and the scientists of Portal Corp., it built its own temporal portal and managed to secure a base under the alternate city of Atlas Park in Recluse’s Victory. A call has gone out to gather the city’s most prestigious Heroes and task them with traveling forward into this time stream.

Now the forces of Arachnos and Longbow battle in a recursive future courtesy of the temporal portal. Each victory and defeat brings reality one step closer to “true time.” It’s up to the Heroes of Paragon City to defeat Lord Recluse time and time again, making that reality more and more real until it finally takes hold and denies all other conclusions. The Villains have the opposite goal, and must try to litter Atlas Park with the broken bodies of their hated foes, securing the anchors for themselves.

There are contacts for each faction who will give an overview of the zone:
Heroes

The neighborhoods in Recluse's Victory are named by sector, starting at the Hero Base and working to the Villain base.

The zone of Recluse's Victory presents an alternative dimension in a constant state of flux. It pits the Good against Evil for control of a potential future for Primal Earth. This future is determined by the capture and control of various Temporal Anchors, each defended by a Pillbox. Each Pillbox that is captured will dramatically alter the surounding zone, changing the landscape to reflect the underlying ideals of those in charge - desolate and broken if controlled by Villains, humdrum if neutral and clean and bouyant if controlled by Heroes. This has no effect on spawning enemies (so for example, if the main Hero base portal is in villain territory, the Longbow NPC's will still be there, only the background changes).

Pillboxes have 4 turrets located at each of the crosshaped corners that start out as Level 54 Pop Up Anti-Personnel Guns. This is a good place to use Heavies, especially when soloing since you will have a tough time securing the Pillbox. Once all 4 Pop Up Turrets are defeated, the player can head to the center of the Pillbox and activate the control panel. Once the capture process (which can be interrupted) is successfully completed, the four corners of the Pillbox convert to 2 different sets of 2 missile Turrets at level 50. Players can stand in the middle and, just like capturing a pill box, activate the controls. This allows them to focus a pill box's firepower at a particular enemy by commanding with a Mastermind's controls. This is useful, since players (while in the center) get extra protection, and can use their powers to defend the pillbox as well as the turrets.

At the capture of the sixth pillboxes for a side, the zone is "won" by that side, and a five minute counter begins. After the five minutes (or shorter: see below), all characters get the message "Dimensional Reversion" and the pillboxes revert to neutral status. All neutral pop-up turrets then respawn on all pillboxes. During the five minutes, the winning side can continue to defeat enemy heroes/villains for bonus credit towards their side's Heavy. In the five minute timer, the losing side can defeat opposing heroes/villains to cause an early Dimensional Reversion.

Lord Recluse targeted the statue of Atlas first, knowing it was an important symbol to Paragon's 'heroes.'

Some say this battle will signal the end of civilization as we know it, and the beginning of a new history—written by Lord Recluse.

Lee Towers may go down in history as the place where civilization fell to Lord Recluse.

A Scar in Time

A strange fluctuation in the time stream keeps pulling victims of an old Rikti mutation drug to this point. Some temporal researchers believe that this connection with the Outbreak is responsible for keeping Recluse's Victory from taking hold, but don't know why.

Vanguard abandoned its Atlas Park outpost in this timeline, not willing to take sides between Freedom Corps and Arachnos. They continue to recruit metahumans of all alignments in their fight against alien threats.

Several investigations into food poisoning at this restaurant found no problem with the food. It was eventually discovered that the frequent dimensional reversions caused by the nearby Temporal Anchor were to blame.

This tunnel leads directly to the Arachnos base. Freedom Corps used it as a staging area for surprise attacks until they were finally driven off and the tunnel entrance closed.

The Meinhoff Building was created in our current timeline to serve as an Arachnos base in this possible future.

The Meinhoff Building was created in our current timeline to serve as an Arachnos base in this possible future.

You have helped defeat Lord Recluse in Recluse's Victory.

You have helped defeat Ghost Widow in Recluse's Victory.

You have helped defeat Scirocco in Recluse's Victory.

You have helped defeat Captain Mako in Recluse's Victory.

You have helped defeat Black Scorpion in Recluse's Victory.

You have helped defeat all the Signature Villains in Recluse's Victory, making you a Justiciar.

You have helped defeat Manticore in Recluse's Victory.

You have helped defeat Back Alley Brawler in Recluse's Victory.

You have helped defeat Positron in Recluse's Victory.

You have helped defeat Penelope Yin in Recluse's Victory.

You have helped defeat Synapse in Recluse's Victory.

You have helped defeat Ms. Liberty in Recluse's Victory.

You have helped defeat all the Signature Heroes in Recluse's Victory, making you a Blackguard.

You have taken over 10 pillboxes in Recluse's Victory, making you a Time Machinist.

50 pillboxes have fallen into your hands.

Back From the Future

100 pillboxes have been captured by you, you are truly a Time Bandit.

You have controlled 10 Heavies in Recluse's Victory.

You have commanded 25 Heavies in Recluse's Victory.

50 Heavies have been at your disposal in Recluse's Victory.

It seems you have mastered the recursive time flux of Lord Recluse's victory. You've spent one hour here, though it seems like much longer.

You spend your free time battling villains in PvP Zones earning you the Predator Day Job. Logging out in a PvP zone will earn you a bonus to your Recharge rate, when you log back in, for a short time.

You spend your free time battling heroes in PvP zones earning you the Predator Day Job. Logging out in a PvP zone will earn you a bonus to your Recharge rate, when you log back in, for a short time.

The entire zone is a Predator day job location, except for the following specific location.

There are no stores in Recluse's Victory

If you have a 1000 or more 'zone points' (Temporal points) (displayed on your navigator) by the time it reverses the dimension, you will obtain the Heavy Temporary power.

For a method of getting the longbow mech, one possibility is to have a friendly villain and hero alternate capture of a single pillbox. Another is to have a big group of heroes/villains to take down the archvillains/heroes, since each one nets each team member 250 points.

You began your career on a high note, by personally ending the riots of contaminated thugs in the Outbreak Zone.

When you were first brawling Contaminated in the Outbreak Zone, did you ever think that one day you'd be known as a villain?