W.I.S.D.O.M. is a hero group led by Foreshadow, added to the game as part of its launch in the Korean market.

Some say Yu-sik Jin is a powerful spirit who was placed upon the earth to help the good and punish the wicked. Even when he is defeated, Foreshadow has reincarnated to once again take up his destiny. He possesses an amazing constitution and superior martial arts abilities.

Dragons Tail Point Blank Area of Effect Melee, Moderate Damage(Smash), Foe: Knockback
This low spinning kick deals the same damage as Thunder Kick, but has a chance to hit all enemies in melee range. Successful hits will trip and knock down your opponents.

Eagles Claw Melee, Damage(Smash), Foe: Disorient
You have been Disoriented.

Chi Blast Ranged Energy/Smash, Foe: Knockback
A ranged attack that sends a focused beam of energy at a foe that can knock him back.

Quickness Auto: Self +Recharge, Speed, Resistance (Slow)
Your Quick reflexes allow you to move faster than normal, as well as resist slow effects. This power is always on and permanently increases your attack rate and movement speed.

Elude Self +Defense, +Jump, +Run
You can improve your reflexes, making yourself so quick you can Elude almost any attack, be it ranged, melee, or area effect. Your running speed and jumping height are also increased. When Elude wears off, you are left drained of all Endurance and unable to Recover Endurance for a while.

Note: Foreshadow's Elude, despite what the description says, has no crash effect.

Fly Self Flight
Foreshadow can Fly! 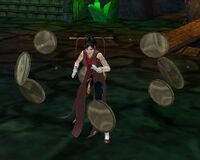 The woman known as The Mirror Spirit is the manifestation of a sacred mirror handed down from generation to generation from ancient times. The mirror came into possession of an evil ghost who used it to commit many crimes before being defeated by Foreshadow. The Mirror Spirit now serves Foreshadow faithfully.

Power Blast Range, Moderate Damage(Energy/Smash), Foe: Knockback
A much more powerful, yet slower version of Power Bolt. Power Blast sends a focused beam of energy at a foe that can knock him back.

Nova Point Blank Area of Effect, Extreme Damage(Energy/Smash), Foe: Knockback, Self: -Recovery
You can explode in a tremendous blast of energy, sending nearby foes flying. The Nova deals massive damage to all nearby foes, although the damage does vary. Activating this power leaves you drained of Endurance, and unable to recover any Endurance for a while.

Note: Despite what the description says, Nova will not cost Mirror Spirit all of her Endurance, nor stop her from recovering Endurance.

Healing Aura Point Blank Area of effect Team +Heal
Healing Aura restores some Hit Points to you and all nearby heroes. Healing Aura is not as potent as Heal Other, but can heal multiple targets at once.

Heal Other Ally Heal
Heals a single targeted ally. You cannot use this power to heal yourself.

Fulcrum Shift Ranged (Foe Area of Effect), Foe: -Damage, Team +Damage
Fulcrum Shift drains the power of a targeted foe and all foes nearby, transferring it to all adjacent allies, the caster, and those near the caster. Affected foes will deal less damage, while your affected allies will deal more. The more foes that are affected, the more power your allies receive. Fulcrum Shift can dramatically turn the tide of a melee battle.

Mirror Trap Hold
Mirrors trap you in a cage without walls preventing you from defending yourself.

Mirror Shield Click Self +27 Def(All) +Res( S20 L20 F20 C20 E20 N20 P20 ), Resistance(Teleport)
The Mirror Shield is almost impenetrable to all attacks, even Psionics and Enemy Teleportation, although attacks from more powerful foes may get through more easily. Mirror Shield will also reduce the damage of any attacks that do get through.

Half Russian and half Japanese, Rose Star is a mischievous but good hearted young heroine, fiercely loyal to her friends and deadly to her enemies. Often turning the tables to save Spark Blade who has vowed to protect her, Rose Star's ability to get into trouble is only exceeded by her incredible strength and durability.

Rose Star is not currently in the game.

A master of weaponry, he wields his katana and long pistol with deadly skill, channeling bolts of lightning through both weapons. Aided in combat by his super-human reflexes, Spark Blade is uncannily accurate and very difficult to target. He has sworn to protect Rose Star at all costs.

Spark Blade is not currently in the game.