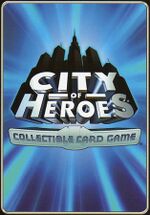 City of Heroes CCG Card Back

(From the City of Heroes CCG Battle Box)

In the heart of Rhode Island stands Paragon City. The site of the first extra-dimensional portal in earth's history, Paragon City drew the attention of the savage Rikti - aliens from a parallel world bent on conquest. Desperate to battle this growing evil, the city's most powerful and renowned hero, Statesman, sent out a plea for aid. From across the world, from across the universe itself, they came. Though the forces of evil are relentless, these voices that answered Statesman's plea seem limitless.

Yet, each one is unique. Each one is a Hero. Now you can take your place among them.

The City of Heroes Customizable Card Game (COHCCG) was designed by David Williams and produced by Alderac Entertainment Group (AEG). There were a total of two decks of cards released for the game. The base deck, Arena, was released in January, 2006. The expansion deck, Secret Origins, was released in October, 2006. An interview with AEG CEO John Zinser in March, 2007, notes that the game was discontinued due to a failure to "reach critical mass."

Both Arena and Secret Origins were released with the traditional 11-card booster packs. However, instead of the traditional 50-60 card starter deck, the COHCCG used "Battle Packs," 25-card packs similar to boosters, with a rules sheet, 11 fixed cards (including 1 Hero, 2 starting powers, and other cards useable by the Hero) and 14 randomized cards which were designed to be useable in most decks. This design was created to allow for random, yet still playable, decks which minimized the cost to consumers. Some promotional and preview cards were available at conventions and as pack-ins with other products (like the City of Heroes Comics). Alternate versions of the rare cards were also available with foil printing.

The primary packs available at retail for the Arena set included Battle Packs and Booster Packs.

The COHCCG was designed to be a quick game. Rather than using a turn structure where each player takes multiple actions in a row, the game used an alternating action structure. This lead to faster and more interactive games.

Each player was represented by a Hero card, which began play with 2 starting powers. As their action, a player had many choices, including:

Unless otherwise specified by the cards played, play continued until only one Hero remained, who was declared the winner.

Building Your Own Hero

In addition to the 33 Heroes available in Arena and the 22 Heroes available in Secret Origins, players could create their own hero using "Paragon" Hero cards. These cards allowed a player to create new combinations of powers that were not available on existing Hero cards. Players could either play solely with the Paragon Hero cards available in the Arena set, or go online to access the HeroBuilder which allowed players to create Hero cards in the same template as the already available Heroes, including a picture uploaded by the player. Although the generic Hero cards listed all power sets available to the archetypes at the time, it wasn't until The Hamidon set was developed that many of those power sets were codified for use.

After the official game was discontinued, two players, who went by 'nlesgold' and 'Landar' on the Alderac forums, took it upon themselves to create cards for the remaining City of Heroes powers (excluding any power sets added or changed after Issue 11) in an unofficial expansion called "City of Heroes: The Hamidon." There are two ways to access the original files, a set of web-accessible text files and a zip file of those same text files. Eventually, graphical representations of the the cards were developed and are linked in the listing below.