This article is about the Primal Earth character. For the Praetorian version, see Infernal (Praetorian).

Infernal is a Hero and trainer in Founders' Falls in the Williams Square neighborhood, located just south of the fountain. His coordinates are (3762, 0, 713) [Copy] , and his location is marked on the map as a contact.

Infernal as drawn by David Nakayama

A master of demon binding and summoning from another dimension, Infernal's boundless willpower allows him to control the many fiends he has forced into his service. As a member of the Vindicators, he often assists Numina of the Freedom Phalanx.

K'Varr D'Shall was the most skilled demon binder in the Order of the Crimson Lotus on an alternate Earth. His order bound demons into their weapons and armor, in order to keep Infernal Earth from being overrun by them. They were maintaining and uneasy peace until K'Varr's best friend T'Keron grew jealous of his comrade's power and skill. T'Keron attempted to bind Valmaz, Lord of Demons, but lost control of the ceremony. K'Varr arrived to help his friend, but it was too late. K'Varr, T'Keron, and Valmaz were all drawn through a dimensional rip caused by the binding ceremony onto Primal Earth, our Earth. T'Keron and the Demon Lord were bound together by the potent mystic forces.

The ways of our world are strange to K'Varr but Numina is assisting him in becoming acclimated and beginning his search for the unholy fusion of T'Keron and Valmaz.

Infernal says the following when fought:

During Take out Infernal:

Before combat: Communications must be up within the hour.
Combat start: Ah, the fabled Character. Prepare yourself for battle! 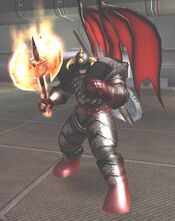 Before combat: As I suspected, the inscriptions match. She was here, all those lost ages ago. Mother...
Combat start: You, that have brought ruin upon my friend Najjar, know that I shall bring ruin upon you.
At 50% Life: If only your power in battle was matched by a spiritual strength. It is a tragedy that you are so out of balance.
Defeated: We will...Meet...Again, Character. This, I swear!


After defeating a player: Should the next turn of the wheel of incarnation see you return as a demon, I will bind you to this armor to pay for your crimes.


During Defeat and Capture Lilitu: 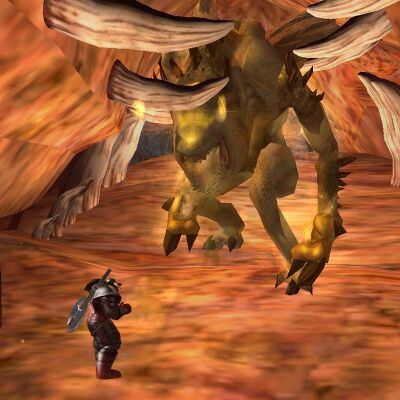