President Marchand is a President (same ranking as a Hero or Archvillain) and leader of the Loyalists faction. He was president in 1963 of the Rogue Isles before Lord Recluse took over.

Villains can find him if they go back in time:

Gerald T. Marchand was elected in 1937, winning a close race against Conrad Oakes. His first eight-year term carried him through the Second World War.[1] During World War II President Marchand officially declared the Rogue Isles neutral, albeit with Allied leanings. When the 5th Column menace alarmed the US, Marchand’s army waged a visible "war" on Column members on the islands, just to placate the Allies.[2]

Marchand was killed in 1963 by an unknown assassin. Lord Recluse and Arachnos took over the Isles soon after.

In some alternate realities Marchand survives the attack of Lord Recluse and keeps the power for many more years.[3]

President Marchand has a cutscene for each of his two appearances. He will escape during the first one: 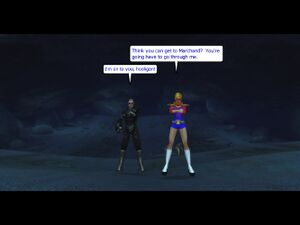 
We know you're close by, Character.
I'm waiting for you.
Think you can get Marchand? You're going to have to go through me.

I'm on to you, hooligan!
Now, Miss Liberty, if you please. How does this thing work again?

You just push the button, sir.

Oh, thank you, dear. I knew that this newfangled technology always confuses me. Better luck next time, hoodlum!!

Later during the same strike force he will try to escape a second time: 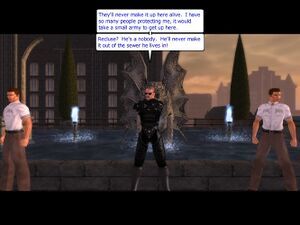 
Memphis! What's the situation inside? Have you taken out the assassin yet? Where's that helicopter!?

Memphis? Memphis? Lock it down! NOW!

They'll never make it up here alive. I have so many people protecting me, it would take a small army to get up here.

Recluse? He's a nobody. He'll never make it out of the sewer he lives in!

And finally he will be cornered and forced to fight:

Before Combat: "I have your assurance that this facility is locked down?"
Combat start: "You can't attack the president of the Rogue Isles!"
At 75% Life: "Where are those aides? Keeping me alive is their job."
At 50% Life: "You treasonous little worm!"
At 25% Life: "You don't know what you're doing! Recluse will destroy the Rogue Isles!"
Defeated: "But my term wasn't up yet..."


Defeats a villain: "Tell Recluse his bid for presidency is TERMINATED."

President Marchand is the leader of the Rogue Isles. He is currently being hunted down by Lord Recluse and his minions. In an effort to further protect himself he has donned a power suit to keep him safe.