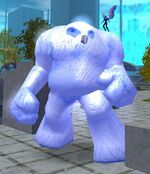 Winter Lords are Giant Monsters that were unleashed upon Paragon City during the Winter Events of 2004 through 2009. In the 2004 event, they randomly spawned in each of the city zones, sometimes with as many as 5 at once roaming an area.

In the 2009 event, Winter Lords were changed to spawn after a set number of presents are opened (or possibly when a number of "naughty" present spawns are defeated), and defeating it lets characters into Lord Winter's domain, giving them an attempt to defeat him. (Between 2005 and 2008, they spawned when a team of 5 or more opened a "naughty" present).

This is a manifestation of the Winter Lord. He is a creature of ancient power that wishes to bring eternal winter to the land. If he is ever allowed a permanent foothold in our world, endless night will fall.

Defeating the Winter Lord will award the Frozen Fury Badge and 6 Reward Merits.

You helped defeat a manifestation of the Winter Lord, who brought his cold wrath to chill your hometown.