This article is a stub. You can help the Wiki by expanding it. 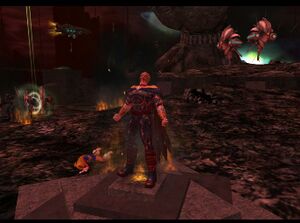 "Victory At Last!"
(Example of a demo edit.)

Demo Editing is a term used to describe the modifying of a CoH demo file. Typically, the modified demo file is then used to produce user-generated screenshots or movies (Machinima) of events and situations which did not actually take place during live game play. A recorded demo is saved as a text file, rather than a standard video file, containing all the commands required to instruct the game engine how to play back the recorded demo. All of this information can be edited, changed, deleted, or added to (or even created from scratch), requiring, at its simplest, only a text editor and a reasonable understanding of the demo file code. This allows for the creation of custom screenshots, comics, and movies via Demo Editing with relative ease.

Demo Editing may be used to strictly refer to just the modification or creation of a custom demo file, or it can be more broadly used to refer to both the editing of a custom demo file and the playback, capture, and production of a modified demo into movies and/or screenshots. The contents section below contains further details about how to edit demo files.

See the Demo Recording entry for information on how to record and play back a demo.