After the destruction of Galaxy City in Issue 21, Gregor Richardson was "rescued" and relocated to Atlas Park, but no longer offers missions to heroes. He is now located in the MAGI office at coordinates (-52, -784, -796)[Copy] .

This article contains information that no longer applies to the current version of City of Heroes/Villains. It is provided for historical purposes.

You should consider introducing yourself to Laurence Mansfield. He is one of the more personable county coroners. He can be a very helpful resource on the Hellions and the Circle of Thorns. He is located in Atlas Park.

Mansfield has a strange sense of humor sometimes.

There's an EMT named Paco Sanchez who'd like to meet you. He's not only great at his job, but he also works well with heroes, tipping them off whenever he sees something interesting going on with the Hellions and the Circle of Thorns. Paco can be found in Galaxy City.

You should introduce yourself to Genevieve Sanders. She's a pharmacist with a heart of gold who does a lot of community work, and she loves to help heroes against the Hellions and the Circle of Thorns. Genevieve is near the hospital in Kings Row.

She is one of the nicest people I know.

Gregor Richardson is from Australia, but he's been in America so long that his accent is almost gone, save for the occasional 'mate.' He's a talented artist who spends every moment he can locked away in his studio, painting. Gregor has a knack not just for the fine arts, but for the mystical arts as well. He and Azuria have radically different approaches to magic. She sees it as something to be guided and respected; he sees it as something to be tamed and used. This attitude makes Gregor something of a rebel in mystical circles, which is probably what has kept him off the Arcane Guild's High Council the past several years. They gave him his post as magic hero liaison only grudgingly, unable to deny the power of the magic he can manifest.

There is no way I can help you. You should be speaking to Active Contact.

I think we can help each other a great deal, Character. I'm an expert when it comes to new magic heroes. Whatever you do, don't listen to that Azuria woman over in Atlas Park. She's nuts.

Come back when you have reached Security Level 4. Then we'll talk.

You've done everything I can ask of you, Character. Why not see what your other contacts have brewing?

You have been a really good friend so far, Character. Look what I have to offer you in my store. Please call if there is any way I can help you.

I think I can trust you. Don't prove me wrong. I found some new enhancements for you.

Take on the Hellions and show them they aren't welcome

What's up, mate? We here at the Modern Arcane Guild of Investigation think Galaxy City may be in a spot of trouble. See, the Hellions are making rapid headway in their bid to take over territory. I need you to take on the Hellions and show them they aren't welcome.

I need you to get out there and kick some Hellion tail.

You found a crumpled note on one of the defeated Hellions.

The note reads 'Another new hero has arrived on the scene. This Character could become a serious problem. We need to meet and discuss potential solutions.' There is also a time and place on the note.

Bust gang leader and his crew 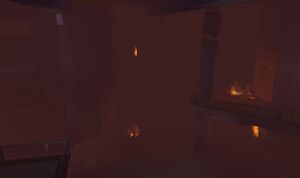 It doesn't surprise me that they know of you already, Character. According to the Entities of the other worlds, you're gonna do great things!

This isn't the usual aroma of gun polish and grease. There's a musty odor in this room, the smell of something ancient.

You found a strange clay statue among the fallen Hellions.

This small clay statue of a man is chipped in a dozen places. It looks as though it could easily be thousands of years old.

Blood Brother Brawler: Do you think this Character is a problem?
Blood Brother Slugger: Nah. We can crush anyone!

This statue grants anyone who touches it enormous luck and longevity. I just don't understand where a bunch of street thugs would get this! We need to find out where such items are coming from.

Check out the Hellions hideout

I need you to check out a local Hellions hideout. The mystics have been bugging me about it all morning. Seems they have a strong feeling that it's being used as a distribution site for all the strange artifacts the Hellions have been using. And I have to tell you, Character, the mystics are very rarely wrong.

Sources tell me the leader of this group is named Destroyer; arresting him could put a serious crimp in the Hellions' artifact distribution plans.

You haven't dealt with that Hellions hideout I asked you to shut down.

A Hellion's malicious laugh echoes off the walls.

You shut down the Hellions' artifact distribution site.

I think I've heard the name Odysseus before. And no, not in the poem! Character, I think the Hellions may be connected to something far bigger than themselves. We had better keep both our eyes on their shenanigans from now on.

Take the doll to Clarence Jackson

Another MAGI hero took this rag doll off a defeated Hellion yesterday. Pretty ugly, huh? I'd like you to take this doll to a contact of mine, Clarence Jackson. He's a garbage man, and he sees a lot of things most people ignore. I'm thinking he might know what the Hellions would want with a thing like this.

Clarence has seen more things than most of us care to imagine.

I want Clarence to see that doll. I need to know what the Hellions are up to!

Here's the doll. Anything Clarence can tell us will help.

This rag doll was taken off a defeated Hellion. The eyes are represented by sharp, black pieces of stone, and a red leather tongue protrudes sickly from the side of the doll's mouth.

Hey I picked up something like this in the trash the other day, then some Hellions came outta nowhere and rooted through my truck to get it back. They said something about it being an idol of power. I looked that up when I got home, and apparently these things give the owner the ability to control the will of others. I'm concerned by this, Character. How did the Hellions come to know about objects of such great power? It's just not typical street gang behavior, that's all.

I was worried it might be something like that. Character, I think the Hellions have been using artifacts like this to wrest territory from other gangs. That's why they're spreading so far and so fast! If I'm right, they could be a much greater threat than we imagined.

Recover the jewely from the Hellions

The Hellions broke into the van Horn mansion last night! No one was hurt, thank goodness, but the Hellions made off with some of Mimi van Horn's jewelry. I've been asked to send a hero to recover the jewelry from the Hellions. The van Horns have a lot of clout in this town, and they know how to use it.

I appreciate this, Character. Next time I'll have a more important mission for you, I promise.

Have you found the jewelry?

Just one month ago, this warehouse was doing a bustling business. But when the Hellions took over the neighborhood, many of the local businesses turned tail and ran.

You defeated the Hellions and recovered the jewelry.

You recovered this stolen jewelry from a Hellions hideout. Many of the items are easily worth thousands, but your eye is drawn in particular to a large, sapphire necklace. You cannot help but wish that it were yours.

You know, I think I know why the Hellions were after this jewelry. Take a look at this sapphire necklace. When you tilt it this way, do you notice the rune that appears in the heart of the stone? It looks like this is actually the Jewel of Enki, an ancient artifact of nearly limitless power. It's a good thing you recovered it, Character! I doubt these Hellions have any idea of the powers they are playing with!

Show the Hellions they're not invincible

The Hellions have been gaining territory hand over fist. The more successful they are, the bolder their attacks get. I even heard that they tried to ambush some heroes the other day! I need you to show the Hellions they're not invincible. If they keep making these attacks, we're going to have a tragedy on our hands.

The Hellions are really starting to scare me, Character

I need you to defeat a few more Hellions.

You have discouraged the Hellion attacks.

Soon the Hellions will learn to fear the name of Character.

Talk to the Security Chief

Talk to the Security Chief

I need you to go talk with the Galaxy City Security Chief. He has information about the current situation here in Galaxy City. Your compass will guide you there.

Please listen carefully to the Security Chief. If he has a task for you, it will be very important.

Here is a briefing sheet on the situation in Galaxy City. Now hit the streets and help out with the Hellions. You might try looking for them in the Equinox or Orion Beltway neighborhoods.

Galaxy City is named after the late Galaxy Girl, who fell during the Rikti War. Though she had few super powers and never gained much fame in the world at large, Galaxy Girl was one of Paragon City's favorites. She was a constant presence in the skies since her appearance in the 1950's. She worked tirelessly to improve the lives of her fellow citizens, not just by fighting evil, but also through her charity work. No doubt she would be proud to see a new generation of Heroes battling the Hellions, a street gang bent on claiming Galaxy City for their own.

You should be fighting Hellions.

You have defeated 5 Hellions.

Well done, Character. With Heroes like you around we have a chance to make Galaxy City safe for everyone.