This article contains information that no longer applies to the current version of City of Heroes/Villains. It is provided for historical purposes. 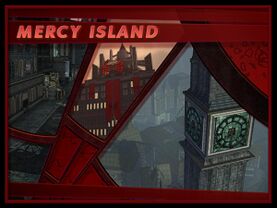 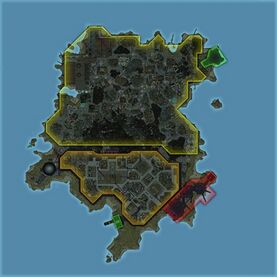 Mercy Island is the first place a villain goes after escaping from the Breakout tutorial zone, excluding Soldiers of Arachnos (VEATs), who do not go through Breakout. As a beginner-level zone, most of the enemies are levels 1-6.

Here, villains will meet their first contact (Kalinda or Matthew Burke) and begin to make their presence known to the powers that be. They begin in an area called Fort Darwin, which also plays home to their first trainer: Arbiter Diaz. They'll likely spend their first five to six levels running missions out of here before picking up a new contact to the southwest. They tangle with large numbers of snakes, breaking the back of that group (at least on Mercy Island). Later missions take them to the area to the south called Fort Cerberus.

NOTE: Soldiers of Arachnos must do a single mission from Alan Desslock before choosing Kalinda or Matthew Burke.

In the days before Arachnos, Mercy was a lone town resting on the low banks of a large island. It was home to some fishing outfits and more than a few wintering pirates, but frequent disappearances and tales of bizarre snake-like creatures kept the population to a minimum.

Lord Recluse claimed this lonely spot of land shortly after his rise to power. Fort Cerberus was erected and patrols dispatched to discover the truth of these “snake-men.” The creatures were found in great numbers, but Arachnos’s overwhelming firepower quickly pushed them back into their warrens. Over the next decade, Mercy grew and the snake-men were forgotten. They were far from dead, however. They had simply retreated deeper into the bowels of the earth. Lord Recluse knew full well the “Snakes” remained, but he was content to leave a few survivors for future study and possible use in his plans of world conquest.

The Rikti War and the many opportunities it presented changed Recluse’s focus in the new millennium. The Snakes were forgotten and allowed to multiply. A year after the Rikti defeat, they rose from their warrens and rampaged through Mercy. Arachnos repulsed the mutants, but Lord Recluse mysteriously—and quietly—left the lower end of the island to the Snakes. The creatures had proved quite powerful, and he felt they could be studied and put to use in many of his secret operations.

The Snake-infested area of Mercy also provided Lord Recluse with another useful purpose—a proving ground for super-powered beings. Those with promise are brought here and tested with a series of tasks to determine whether they have what it takes to survive. Those who do are tracked for possible recruitment into Arachnos’ ranks. Those who don’t are left to fend for themselves, becoming prey to the stronger.

Many would-be villains have drunk their fill from the cesspool in hopes that it might grant super power. Mostly they go insane.

This is the main entrance to the Snakes' underground lair. You really don't want to go down there.

Just when you thought it was safe...

Arachnos built the wall around Mercy to keep it safe.

This is the good life. The higher up you get, the bigger you are.

They say that lonely tower is the home of Ghost Widow, Lord Recluse's phantom servant.

The first rule of Infected Fight Club is that you don't talk about it. At least that's what the RIP told you after you walked in on one of their Infected Fighting Rings in Mercy.

Larry's Tiki Lounge is known for its gambling, drinks, fun, and Tikis. And also for the occasional invasion by giant snake monsters.

You have learned much that is hidden from the eyes of mortal men.

Your time spent working with the financial institutions of Paragon City during your free time has earned you the Banker Day Job. Logging out in a Vault will earn you an Influence Bonus, when you log back, in each time you complete a mission for a short time.

Your time spent staging heists on the various financial institutions of the Rogue Isles has earned you the Thief Day Job. Logging out in a Vault will earn you an Infamy Bonus, when you log back, in each time you complete a mission for a short time.

Your time spent working at Wentworth's has earned you the Day Trader Day Job. Logging out in Wentworth's will grant you a Brain Storm Idea Salvage after mission completion, when you log in, for a short time.

Your time spent supplying the Black Market has earned you the Marketeer Day Job. Logging out near a Black Market will grant you a Brain Storm Idea Salvage after mission completion, when you log back in, for a short time.

You spend your free time perfecting your costume earning the Fashion Designer Day Job. Logging out at a Tailor will earn you a discount to Tailor fees, when you log back in, for a short time.

You have aided Arachnos by piloting its fliers, helping Lord Recluse better mobilize his troops, earning you the Pilot Day Job. Logging out near a Black Helicopter will earn you a Speed Bonus, when you log back in, for a short time.

Arachnos is more likely to pound you into dust than let you near one of their fliers. And your license is no good in Paragon City, it seems.

You spend your free time smuggling in illicit black market goods earning you the Smuggler Day Job. Logging out near a ferry will earn you a random enhancement, upon each mission completion, for a short time.

You've scored the biggest coup of all; smuggling directly into Paragon City. Unfortunately, it's a long round-trip.