The Mission Architect, fictionally presented as a training exercise for Heroes and Villains, allows players to build their own missions and Story Arcs and share them with others in the game. Using a point-and-click interface and filling in all the text of a mission, players can create story arcs of up to five separate missions by selecting options like size and type of the map, mission objectives, encounter types, and difficulty level of each encounter, as well as choosing the powers and costumes of some of the foes.

Player-created content has been internally talked about for a very long time, as evidenced by a post[1] by Jack Emmert in 2007:

I think player created content can be GREAT...if it's handled correctly.

... We've always talked about ways to get player material into the game...imagine using the base creator tools to make your own missions! Or a your own training room? Maybe some day we can figure a way to put this stuff into the game. The imagination just on these forums alone is so amazing; I can only hope we find a way an outlet for it.

And Issue 14 finally realized the dream. 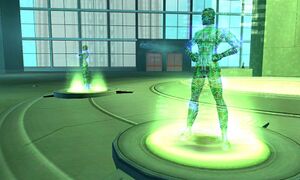 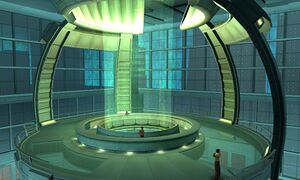 Most city zones have Architect Entertainment Buildings. Players can find them marked on their maps with an AE logo (there is an option on the mini-map that will toggle its visibility).

Players initially have three arcs per account, but more are available on request by submitting a ticket. A published arc can contain up to five missions. All Architect missions are instanced, accessible through the Data Stream in the center of each building. While players are on an Architect mission, it is similar to being on a Task Force/Strike Force; other contacts are unavailable. However, unlike Task Forces, players may still be invited after the arc is started.

Missions can be level restricted, meaning players can be forced to sidekick or exemplar for the duration of a mission. The level restriction of each mission is separate; one mission might sidekick, the next could exemplar.

Missions are saved locally. There is an 'autosave' option, which overwrites itself every couple minutes with the arc's current data. If the player gives their arc a unique file name, the autosave option overwrites this file instead. WARNING: not giving an arc a unique file name and autosaving to the generic autosave file can cause loss of data if updating more than one arc. The newest save is always the current arc being worked on, so use unique file names. Due to being saved locally, story arcs can be edited offline as text files. The file structure takes a little getting used to, but it is fairly simple.

The Mission Architect allows players to create their own named bosses and foes, customizing their costumes, powers, and where and how they appear in the mission. Additionally, mission maps can be selected specifically (eg, specifying the Freaklympics map) or by a randomized choice of a certain type of map (random choice from all abandoned warehouse maps). There are close to a thousand maps to choose from and more are being made available.

MA arcs offer the option of getting Ticket Rewards in place of drops. On Homecoming, this is largely a vestige of a facility from the pre-shutdown game; other than one badge, there is nothing which needs tickets to obtain.

All players can rate published missions from 1 to 5 stars, and leave a comment. As missions are played and more people positively rate them, the creator gains rewards such as Tickets and badges and possibly having their arcs designated Hall of Fame or Developer's Choice.

Additionally, players can leave comments for the author (sent as global tells) with suggestions or anything else.

Also while rating, players can also report arcs as inappropriate and give reasons why. Arcs with many reports will automatically be hidden from the search function until reviewed by a GM. Arcs that are banned take up a story arc slot until re-evaluated by a GM, which reduces the number of arc slots that player can use.

The Mission Engineer accolade can be earned by completing a variety of Mission Architect related tasks including creating missions, reviewing missions, rating missions, etc. This accolade allows a character to use the /architect slash command anywhere in the game.

There are many Architect Entertainment Badges.

Dev's Choice and Hall of Fame

Arcs are marked as "Developers' choice" through a process of nominations on the Homecoming forums which the HC developers review.

Arcs enter the Hall of Fame when a large number of players rate an arc favorably.

Both of these are search options in the Architect menu.