This article is about the signature character. For the developer Matt "Positron" Miller, see Positron (Developer).

Positron is a signature hero, a Task Force organizer in Steel Canyon, and a member of the Freedom Phalanx and one of the Surviving Eight. His location in Steel Canyon is (-3136, -80, -501) [Copy] . He regularly appears as a hero reinforcement in Recluse's Victory.

Dr. Raymond Keyes developed a high-tech battle suit that allowed him to channel bolts of anti-matter into fierce attacks. He used his powers to help defeat the Rikti, but at a terrible cost: Injuries he sustained at that time caused him to lose full control of his powers. Now, to protect others from himself, he remains imprisoned within his battle suit. He is constantly searching for a cure for his condition, but that does not stop him from contributing to the defense of Paragon City and contributing many other technological breakthroughs for the good of all.

While working for Crey Industries, Dr. Raymond Keyes developed a high-tech battle suit that allowed him to channel bolts of anti-matter into fierce attacks. The suit, developed under the false pretense of being used for disaster relief, was to be used to make anybody Crey wanted into a superpowered being. Ray was completely oblivious to this fact however. One day while working in his lab, Ray's friend Steve Berry, aka Synapse, stumbled in and collapsed in his arms. Dr. Rudy Bein, Ray's partner on the Disaster Suit project, was pursuing Steve and burst into the lab with a gang of thugs guns blazing. Ray jumped into the prototype suit, fended them off and escaped with Steve in his arms. Ray would then go on to become Positron, and Steve Synapse.

Positron used his powers to help defeat the Rikti, but at a terrible cost: Injuries he sustained at that time caused him to lose full control of his powers. Now, to protect others from himself, he remains imprisoned within his battle suit. He is constantly searching for a cure for his condition, but that does not stop him from contributing to the defense of Paragon City and contributing many other technological breakthroughs for the good of all. 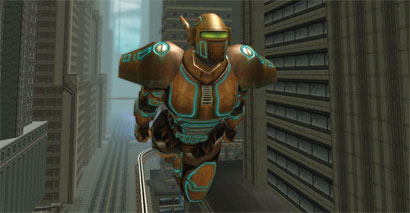 Positron as seen in City of Heroes

Positron is one of the Surviving Eight, dedicated to helping Paragon City rebuild after the Rikti War.

Positron's sidekick is Valkyrie. He is trying to help her come to terms with her new identity of a super hero.

During a Canon Fodder question and answer post to the Official Forums on July 2, 2009 by Manticore, Positron's powers and the use of his armor was described:

Question: Did Positron use his power armor to fight crime before or after developing the ability to generate anti-matter?
Answer: A lab accident early in his career granted Dr. Raymond Keyes the ability to generate small, insignificant amounts of anti-matter material. So small that if it wasn’t for his scientific mind he probably would have lived the rest of his life without realizing he had the ability. Fortunately for us, Dr. Keyes traced a pattern of “weirdness” occurring around him to this innocuous ability. He and his colleague Dr. Rudolph Bein built the original Positron suit as a way to harness the anti-matter he naturally generated, and could then use that harnessed energy to project his anti-matter beams and power his rocket boots for flight.

During one of the last battles of the first Rikti War, Positron was severely injured, and lost any sort of control he had over his anti-matter generation ability. Since the suit was specifically designed to harness and store anti-matter, he locked himself inside of it for the safety of those around him. Events surrounding the return of Hero-1 to Primal Earth saw him “cured” of this condition, and he can now enjoy a life outside the armor.

You have helped defeat Positron in Recluse's Victory.

Positron as drawn by David Nakayama

Positron first appeared in City of Heroes #1 from Top Cow.

Positron is featured in The Freedom Phalanx novel by Robin Laws.

Positron was created by Matthew ("Matt") Miller who also uses the Positron name on the official forums.

Origin of the Character

According to Matt Miller, creator of Positron:

"Positron is a character of mine from an old Champions campaign that I played in high school, so he's like almost twenty years old, the idea for him now. He's actually gone through many, many iterations, he's had different power sets, different origins, different, you know, everything in the times I've played him in all these different role-playing games, and so when I came to Cryptic Studios, I just wanted to make sure that the character was able to be put into the game, you know, add him to the IP, and so I did." (Source: Interview with Matt Miller on World of Roleplayers Radio, October 26, 2006)

This section contains information about changes that took place in City of Heroes/Villains. It is provided for historical purposes.

Originally, Positron was classified as an energy Blaster rather than radiation Defender. His costume was also altered slightly adding the glowing blue outlines on the various pieces of his armor.

Starting in Issue 10, Positron doesn't wear a helmet in Steel Canyon. He was killed during a battle and after being resurrected, he was in full control of his powers once again, no longer forcing him to stay inside his armor at all times. The battle and resulting transformation occur in Issue 20 of the Top Cow comic series.