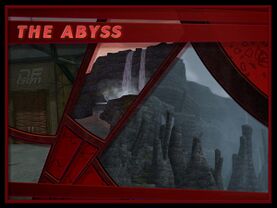 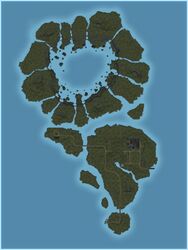 The Abyss is a co-op Trial Zone.

This is the Abyss. If you take a look around, you'll be able to see why. Not much is going on here at the dock, but just wait until you head in further.
This area is what we in the Recon profession like to call a 'trial zone.' What this means is that, for you, it's gonna be a trial. I guarantee it.
If you have friends, or even accomplices, you may want to give them a call. In fact, call some thugs down the street while you're at it because The Abyss is no place to wander alone.
See my report for more information. It should give you an idea what to expect:
RECONNAISSANCE REPORT
*** Approved Use Only ***
History: The Abyss archipelago is a series of islands which comprise the abandoned site of failed genetic and biological experiments. These 'experiments' have been contaminated by the waste, debris, and chemicals associated with human mismanagement of the past. When human presence terminated in this area, the Devouring Earth immigrated here, making these islands their own.
Hostiles Strength: Levels 45 through 50
Suggested Squad Parameters: 5-person to 8-person teams
Highlights:

A safe area, probably the only one.

Formerly the 'nerve center' of the Archipelago, this area is nothing more than a crumbling structure of vacant buildings and unused equipment.

A popular location to strategize before entering the sinkhole.

The sinkhole is where the monster known as 'Hamidon' appears.

You have located where the Devouring Earth have attempted to bring forth the Hamidon outside of the prying eyes of Paragon City.

You have visited the infamous 'Site C', where genetic experiments took place before the Devouring Earth took over the Abyss.

This once was a place of amusement and adventure, a place for people to get up close and personal with real monsters. What fools. The hubris on display here is staggering and you have to suppress the urge to snicker at the fate that befell them. You deal with monsters all the time, literally and figuratively, and the last thing you'd do is treat them like some kind of side-show attraction for the kiddies. You can't help but put yourself in the monsters' place; you'd have smashed and devoured these puny little humans too.

The very air vibrates with the barely contained rage of the creatures that had once been penned here—relegated to servile status for the amusement of lesser beings. You can relate, you've been subject to incarceration for violating ridiculous laws meant for equally lesser beings, and you threw off their shackles just as these monsters did.

You'd heard a recording of the last transmission sent from this location: a frantic helicopter pilot trying to get his whirlybird off the platform before the monsters closed in. You could hear the terror in his voice and it made you smile. You know what that terror is like. You've felt it and been the source of it for others. That last fifteen seconds as the pilot's scream mixes with the heli's collision alarm are audio gold.

Apparently Hamidon hates humanity for their damage they have wrought upon the Earth's biosphere. Every city is like a festering sore, every clear cut forest is a scar, blah blah blah. You get it. But standing before this waste disposal site, with its ranks of waste barrels, you have to wonder what the people who ran this place were thinking. Do they even know what kind of world they live in? Where genocidal mega-villains like Hamidon make it a point to target places like this? The people who died here deserved what they got.

According to the briefing, some of the facility's survivors fled to this location in a last ditch effort to avoid the inevitable. If you look among the grass you can still see some dark splatters that might be blood and maybe a bone fragment or two. It gives the place an air of desperation and terror that is not entirely unfamiliar.

A yawning void opens before you, a testament to Hamidon's power, but you are unmoved. You have seen true darkness first hand and it has not kept you from pressing onward. You carry enough darkness within you and it's going to take a lot more than a big hole in the ground to impress you. You've gazed into the abyss, and it's gazed into you too; you're both well acquainted with each other and have few secrets left to share.

There is only one entrance to The Abyss. It is accessed via the Smuggler's Submarine which connects to Grandville, Monster Island, Sharkhead Isle, and Kallisti Wharf (and Independence Port and Peregrine Island for Rogues, Vigilantes, and Heroes).

The Abyss is completely under control of the Devouring Earth. In the center of a watery bowl-shaped area in the north, you can find Hamidon, surrounded by its mitochondria. When Hamidon occupies its spot, it is the only enemy in the entire zone. If Hamidon is not present, Thorn, Stropharia, Lattice, and Quarry monsters roam throughout the zone. Defeating the monsters will earn a villain Essence of the Earth inspirations.