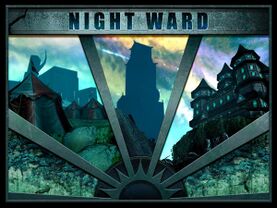 Dark forces hide in Night Ward, threatening to destroy the world. Night Ward is a Level 30-35 co-op zone where characters encounter strange magical allies and foes. This Praetorian zone is connected to First Ward, and is a realm trapped between the land of the living and the world of the dead.

Night Ward is a pseudo-dimension created by a small portion of the Netherworld overlapping the world of the living in First Ward. As such, it closely mirrors Praetoria’s First Ward geographically, but that is where the similarities end. The zone is packed with the spirits of the dead who are trapped between worlds. Night Ward gives both the living and the dead an opportunity to view things from the other side of the veil.

An arduous trek across Night Ward's misty plain has brought you at last to Lichgate's Chapel of Enduring Light. Your faith grows fleeting as you observe the disheartened souls around you, lying in wait to be ferried to the other side. You begin to feel as though perhaps your journey to this land has been in vain. Perhaps you have been led this far only to have your spirits broken like so many of those around you. Night Ward can be a cruel mistress.

You have landed in the heart of the Black Knight's encampment. Whether you stormed through with guns blazing or stealthily slinked past its many guards, Night Ward recognizes the bold of spirit and plays her next move accordingly.

Chance holds little sway over the fate of Night Ward's visitors, and your happening upon the Midnighter Mansion was no exception. Despite the gloomy facade of this old Victorian house you feel eerily at home within its walls.

You've managed to push your way through the teeming crowd of displaced souls in an effort to get a ticket out of Night Ward - only to find that there ain't no train a-comin'. Unlike the dead, however this does little to faze you. After all, if creatures keep finding ways in there must be other ways out.

The final resting place of the Seed of Hamidon radiates a chill that permeates even Night Ward. In spite of this you take comfort in knowing that Night Ward is beyond Hamidon's reach. But to those denizens unfamiliar with the events leading to the fall of First Ward, this skull-shaped husk is an object of superstition and trepidation. It seems that even in death the Seed continues to spread its influence.

You have discovered the first of many lighted paths in Night Ward. The Carnival of Light has been working tirelessly to hold the darkness of this realm at bay by way of their protective luster. With the light as your guide you are free to traverse Night Ward's darkest corners, undetected by the countless dangers that heed her call.

As you set foot in this peculiar stone circle you can feel ancient magics coursing through your veins. The source of its power remains a mystery - as well it should. Night Ward harbors many secrets too awesome, too transcendent for the mortal mind to behold. To merely be counted among those touched by her radiance is in itself a humbling experience.

Throwing caution aside you reach the uppermost point of Night Ward. Here, scattered spirits soar overhead like shooting stars in the night sky, forever doomed to the limbo of Night Ward as she drifts ever further from the land of the dead.

Your time spent studying death itself has earned you the Mortician Day Job. Logging out in a graveyard will earn you protection against Experience Debt, when you log back in, for a short time.

Note that only Primal Earth characters can use the TUNNEL System.