This article is about the Paragon City Zone. For other uses of Faultline, see Faultline (Disambiguation). 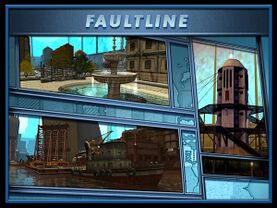 The Overbrook Dam was an amazing step forward for Paragon City, and it began a new area of prosperity. When the Arch-villain Faultline held Overbrook ransom with his earthquake device, not many took him seriously. A group of fledgling superheroes did attempt to stop him but failed, and the master of tectonics set off his device, wiping out Overbrook. Faultline disappeared and has not been seen since. The ruins of Overbrook adopted his name, and many villains began to inhabit the area.

Faultline officials recently provided funding for reconstruction and work was underway in the first neighborhood, when major disaster struck. Due to strange seismic activity on the moon, tidal anomalies caused the Overbrook Dam to rupture flooding the zone. Additional crews have been called in to assess the Dam and shore up the rest of the zone, however, they are continually thwarted by the recent arrival of new villain groups to the area and one group, in particular, that no one expected: Arachnos. It appears Arachnos has been poking around supergroup base wreckage in Faultline for some time, searching for technology that will further Lord Recluse’s nefarious plans. Paragon Officials have called in small detachments of the Paragon Police Department and Freedom Corps, but are also asking heroes to come forward and protect the new city.

Funding has recently been passed in an effort to stop the damage caused by the leaking Paragon City Dam.

Dr. Hank Neville, foremost geologist, was attacked by Arachnos, but escaped with the help of Freedom Corps troops.

The dam burst here due to exceptionally strong seismic activity.

Best doughnuts in all of Paragon City! You picked the ultimate bragging rights location.

The Rusty Rivet, a local tavern, caters to construction crews. Unfortunately, this is also where large brawls between The Lost and anyone within the area tend to break out. Paragon Police are frequently called in to settle disputes.

The Ace Storage facility is where important wreckage that has been retrieved from Aftershock and Overflow is stored. Crates, barrels, and transport vehicles litter the large lot. The Freakshow have started upcycling some of these materials for their own purposes.

This dumping ground is also a hideout for The Lost, within the mounds of refuse. Freakshow have been known to make their way over, looking for spare parts and causing trouble for the ranks of the poor and the homeless, forcing them to accept further mutations to protect themselves.

Perseverance and downright determination brought you this badge. Only the most devout egg hunters will find this spot. Lucky you.

You have learned the history behind the founding of Hero Corps.

Just Said No to Superadine

You have learned the history of Superadine, the newest designer drug to plague Paragon City.

You have learned the history of the Back Alley Brawler's war on drugs in Paragon City.

The following plaque is currently not associated with any known history badge:

You have spent your free time running a shop in Paragon City selling various wares earning you the Shop Keeper Day Job. Logging out in a store will earn you a random enhancement, upon each mission completion, for a short time.

You know better than to work retail in the Rogue Isles. Logging out in a store will earn you a random enhancement, upon each mission completion, for a short time.