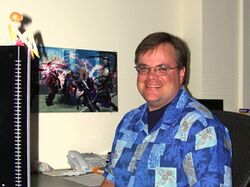 Vince D'Amelio is a Senior Programmer for the City of Heroes/Villains team focusing on features like holiday events, the invention system and PvP zones.

Vince is a long time gamer who played tabletop games such as Dungeons & Dragons, which evolved into computer games. He studied Computer Science at Cornell University and entered the computer gaming industry in 1998. Right after the launch of City of Heroes in 2004, Vince joined Cryptic Studios.