The 2011 Winter Event was scheduled to run from December 13, 2011 to January 3, 2012. New content in the 2011 version of the traditional event included two new badges, several new possible rewards from opening presents and the inclusion of Lord Winter's Realm in the LFG Menu.

Players who logged in during the event received the Festive Badge, as well as the Holiday Spirit temporary power, a single use of the Holiday Cheer power, and the Ear Muff costume option.

Any debt you incur is reduced by 25%. This effect lasts for 2 days of gameplay.

This is a gift you can give to someone special.

Holiday Cheer can be targeted on another player and when used will give that player a single instance of the Mystery Gift power.

Someone special has given you a gift. What could it be? 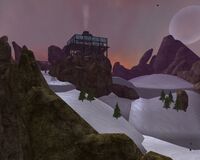 The area is accessed via a door upstairs in the villain side of the club. The Chalet itself is home to Father Time and the Candy Keeper. The surrounding area has ski slopes that characters can slide down with a timed mini-game for badges, and Gravity Geysers (as in the Shadow Shard) to quickly return to the top.

One of the Winter Horde welcomes you to open a present.

Mysterious glowing presents appear throughout Paragon City and the Rogue Isles, courtesy of Gamester. A large gallery of locations is available in the main article.

Opening a present while on a large enough team will spawn a Winter Lord. When defeated, heroes and villains can enter Lord Winter's Realm via the Team-Up Teleporter. Here, they face off against Lord Winter and his Winter Guardians and will earn Candy Canes, Reward Merits, and the Lord/Lady of Winter badge for defeating Lord Winter.

Lord of Winter / Lady of Winter

You helped thwart Lord Winter's scheme to turn your hometown into an icy wasteland.

Creates one Snow Beast to do your bidding. Snow Beasts desire nothing more than to freeze everything they come into contact with. You only have 1 Snow Beast and he will last for 5 minutes before melting. You cannot bring your snow beast across zones. You may have up to 3 copies of this power.

Can be used on friend and foe alike. Although there are no lasting effects when these frozen missiles are hurled, who doesn't love throwing a snowball? Snowballs should last 12 days. Happy Holidays!

This jet pack allows you to fly for a short period. If you attack a target while this pack is on, your flight speed will be temporarily reduced to Hover speed. This Rocket Pack will last for 30 days.

The Gamester has sprinkled these mysterious Duplicating Gifts throughout the world. Each one has the ability to make copies of itself, but only if the target doesn't already have a Duplicating Gift- and each one only lasts a short period of time! Pass on the Gift Which Keeps Giving to all your friends and spread the holiday cheer! Expires in 10:00 of real time

This Gamester present mystically summons a light snow to follow you and your friends around. It will affect all those in a 60 ft. radius for up to 10 minutes. This effect is purely cosmetic and can be canceled.

You've received a copy of the mysterious Duplicating Gift from another! Don't forget to pass it on!

You've passed along the mysterious Duplicating Gift left by the Gamester!