Dr. Kane's House of Horror (HH) is a Halloween-themed co-op trial released as part of the Halloween Event 2011. This trial requires exactly 4 characters of level 15 or greater and can be accessed via the Team-Up Teleporter in the LFG Window, a selection on the Chat Window. High-level characters will be exemplared down to level 29 for this trial.

Halloween Trial: Dr. Kane's House of Horror
Required Number of Players: 4
Objectives: An old Victorian mansion situated on a hill. A lonely path leading up to the mansion, a path that winds its way through an ancient graveyard. The moon is full, the trees bare and dark. Jack O'Lanterns line the path to the door where revelers await. The mansion is home to Dr. Kane, a retired scientist known for his eccentric behavior. This year, Dr. Kane has turned his home into a haunted house and has invited all who dare to come and visit. But things are not as they seem in Dr. Kane's House of Horror - visitors are entering the mansion never to be heard from again.

Enter Dr. Kane's mansion and question him about the mysterious disappearances.

A simple Halloween tradition - a visit to a haunted house.


This year, Dr. Kane, a retired scientist and noted recluse, has dared thrillseekers to venture into his dark and mysterious mansion.
But things are not as they seem in Dr. Kane's house of horror.


Visitors are entering the mansion never to be heard from again....
Welcome Dialogue

Costumed Employee: Enter at your own risk! It's your skin after all.
Barker: Come one, come all!
Barker: Hurry inside! We need more limbs!
Barker: You'll pay to see the whole house, but you'll only use THE GRAVE!
Barker: Enter Dr. Kane's House of Horror if you dare!
Costumed Employee: Welcome to Dr. Kane's house of horror. Step inside for the fright of your life!
Haunted House Attendee: Anyone been in there yet?
Barker: Are YOU ready for heart-stopping terror?
Barker: Step inside, we need your flesh!
Mr. Mortuary: Anyone who wears a costume for a living may enter free of charge. Go right in.

Fine night for a haunted house, don't you agree?

Well I suppose it could be alarming to have so many young people vanish on one night. Perhaps they've lost their way. I suggest you enter and look for them.

If the rumors are true and people are going missing inside this house, then I think someone like you should be trying to find them. A little adventure never hurt anyone, yes?

Just step inside and enjoy Dr. Kane's home. It's a bright and cheery place if I do say so myself. Oh, and try not to leave stains on the carpet, hmm?

Upon entering the zone, proceed up the stairs to the front door of the manor. Speak to the line attendant, then click on the door to enter.

Before any character enters the haunted house, an optional boss may be spawned and fought. First, speak to the Devil Girl in the graveyard to the left of the house. Then speak to the Bored Gal (Madame Maven) and Bored Guy (Halox Von Horn) in the gazebos on opposite sides of the mansion. Finally, return to the Devil Girl and fight The Black Whip.

We are sisters of the darkness. We are the ones who will call forth the Black Whip. Would you care to aid us?

The Black Whip cannot enter this world without, hmmm, let's call it sustenance. We've placed harmless enchantments on some of the sweets around here. You can help us by convincing the flies to go to the honey if you get my meaning.

So be it. Consider it a pact.

A dark pact has been made.

That's right! Do you think it's safe to eat?

Keep your eyes open, I'm going for it.

Bored Gal will run to the candy cauldron, eat, vomit and fall down.

Uhg. I don't feel so good

That's right! Do you think it's safe to eat?

Keep your eyes open, I'm going for it.

Bored Guy will run to the candy cauldron, eat, vomit and fall down.

Uhg. I don't feel so good

The pact has been sealed! The Black Whip comes!

The Black Whip will have appeared at the grave near Devil Girl.

A Dark and Forlorn House

Dr. Kane must be somewhere in this mansion. Locate him and see if he knows anything about the missing guests.

Thrillseekers line up for their turn to be terrified.


But the smell of blood hangs in the stale air.
Inside Dialogue

Honestly, have you ever seen such a crappy haunted house?

Canned screams, fake zombies. I saw some guy down the hall tearing fake guts out of someone. I watch all of those ghost shows on television and let me tell you something - haunted this place isn't.

They probably ran away because it's SO FAKE. I mean I want to be scared to death!

Right! What are they going to do? Murder me horribly?

Up the stairs is a hallway populated with zombies. Make your way through the twisting hallways clearing through the zombies until you reach Dr. Kane.

A shrieking voice cries:
What is wrong with the flesh? Is it that it clings to the backs of the living?
All flesh must be taken! The abomination will become more than human!

The madman himself, Dr. Kane.
His eyes dissect you as a butcher evaluates a side of meat.
Dr. Kane

Dr. Kane: What have we here? More flesh for the taking?
Dr. Kane: Let's have a bit of fun first, shall we? Let me introduce you to my pets....

Defeat the zombie ambush and follow Dr. Kane into the crypt.

The smell of decay and littered corpses betrays Dr. Kane's dark secret as a defiler of the dead.


But to what end is this madman working?


The shuffling of cold, dead feet heralds the walking dead and promises that more of Dr. Kane's horrors await you.

Make your way through the mansion's crypt, beware of ambushes of Lurkers and Zombies bursting from the ground.

Dr. Kane: Welcome to my underground lair!
Dr. Kane: You will make fine playthings for the Abomination...
Dr. Kane: But first, meet one of my most prized failures. I call him Experiment Number Nine!

At the end of the crypt Dr. Kane will raise an Archvillain called Experiment Number Nine. He is fairly simple to defeat, similar to Adamastor, but will summon Lurkers during the fight. Defeat it and proceed through the cave door to the graveyard. 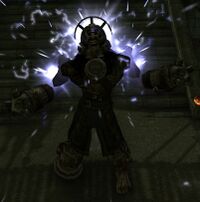 You've got Dr. Kane cornered. Find him and put an end to his vile endeavors.

After entry to the graveyard:

During battle with the Abomination:

Dr. Kane: What? This can't be happening!
Dr. Kane: Abomination! I command you! Eat them!

Dr. Kane presents his final creation: The Abomination. This Monster has two powerful AOE attacks, which are preceded by warning text about "raising his hands" or "raising his foot". Once the Abomination is defeated, trial rewards are given.

During the battle with The Abomination, an optional mission objective exists. The optional task requires the players to defeat 99 zombies and then the abomination within 12 minutes. Zombies are spawned by walking (not hovering) over the graves to either side. Completing this side task grants each player the It's Alive! Badge.

Additionally, if you defeat The Abomination while using a Model Replacement Costume Power, you will earn the Tricked Out Badge.

Dr. Kane has been defeated!

For surviving Dr. Kane and his Abomination, you certainly deserve a Treat! Select your reward.

After Defeat of the Abomination:

Dr. Kane: You've ruined everything!
Dr. Kane: What have you done?
Dr. Kane: Do you know how many trick or treaters it took to make that thing?!
Dr. Kane: Leave me to my grief!
Dr. Kane: I will rebuild him! Just you wait!

You think you've beaten me?

What will I do now? Being evil is all I know how to do.

Eureka! You're right! We NEED to improve the health of mankind by infesting it with disease!

Or we could mutate the disease at the cellular level and enlarge it until it's the size of a house! That's the only way we will learn more about it! Perhaps let it feed and determine how it replicates.

Is There a Doctor in the House?

You braved the haunted mansion of Dr. Kane and defeated his Abomination!

You defeated the Abomination and 99 of Dr. Kane's zombies in under 12 minutes!

You summoned and defeated the Halloween demon, Black Whip! Needless to say, the beast was stunned. Whip-crack went his whippy tail, and the beast was done.

You took out the Abomination wearing nothing but a festive Halloween costume!

Death from Below (Blueside DFB) ·

Death from Below (Redside DFB) ·

Tree of Thorns Respecification Trial I ·