Listing of merchandise licensed, sold, or given away by NCsoft and Cryptic Studios that involves the "City of" franchise. The US version of the PlayNC store stopped selling non-game merchandise in January, 2007, while the EU store was open from September, 2007, through September, 2012.

These items are the boxed retail products that were available in stores around the world.

These items are the game time cards that were available in stores around the world.

Super Boosters and other related digital-only bundles were collections of similarly-themed costume pieces, powers, and emotes. Eventually, these were discontinued and the individual items were made available separately on the Paragon Market.

All digital items were eventually transferred to the Paragon Market, some in bundles and some individually. Hundreds of different items were available to purchase by the time the game shut down.

Alderac Entertainment produced the City of Heroes Collectible Card Game in 2005, with an expansion set, Secret Origins, in 2006.

Two novels were published by CDS Books: "The Web of Arachnos," by Robert Weinberg, was released in October, 2005, and "The Freedom Phalanx," by Robin D. Laws, was released in April, 2006. A third novel, "The Rikti War," was planned from the beginning of the series, but was eventually abandoned.

This sketchbook was produced in May, 2008, by Draw the World Together, a project that creates possibilities for children through art, as a charitable fundraiser for EveryChild. The 32-page book featured sketches of prominent CoX characters contributed by 22 artists, including Dave Gibbons, Doug Braithwaite, Al Davison, Andrew Wildman, and David Nakayama. Limited to 500 copies. PlayNC EU Store price: £5.00 / €7.50 / $10.00

A shirt produced by NCsoft to advertise and celebrate the release of two new games (at the time): City of Heroes, and Lineage 2. These shirts were not available at retail, but only at conventions and some store promotion packages.

This shirt was given to Cryptic Studios employees to promote the initial release of City of Villains and was not available at retail.

A heroic blue shirt with the traditional star at its center, available only in the PlayNC EU store. PlayNC EU Store price: £19.99 / €29.99

A villainous red shirt with the the usual Arachnos symbol at its center, available only in the PlayNC EU store. PlayNC EU Store price: £19.99 / €29.99

Created by Alderac Entertainment to promote the City of Heroes Collectible Card Game, with artwork by Nate Barnes.

The much sought after 'Freem!' shirt. This T-shirt was only available to purchase at the 2008 San Diego Comic Convention.

A limited edition T-shirt with artwork created by the player @Liz (syrusb) to help celebrate City of Heroes' 5th anniversary. This shirt was available in limited quantities at North American NCsoft convention booths in 2009.

This cape was made from 100% polyester and dyed black with a bright red Arachnos symbol on the back. Its size is intended to be comparable to the short cape length found in-game.

The Arachnos cape was available to players through conventions and a few contests. Some advertisement kits given out to promote the upcoming release of City of Villains contained the cape, as well. The kits were given mostly to press and certain stores, but players were able to sign up on the marketing company's web site in limited quantities to receive the promotional kits in an attempt to promote viral advertising for the game.

These boxing gloves were promotional items created for the original Veteran Rewards, and were also given to gaming journalists along with copies of the game. Not available for purchase at retail.

Poster given away as part of the marketing campaign for the City of Villains release.

A poster released in conjunction with the Good Versus Evil Edition box set, measuring 59.5cm x 84.1cm (A1). This poster was only available at the PlayNC EU store or from conventions at the time of the GvE's release. PlayNC EU Store price: £4.99 / €6.99

Please note that there are two versions of this pin set. The 2008 version consisted of fairly normal metal pins but did not include ones for the Peacebringer and Warshade archetypes. Nicer metal ones with two-prong backs and a silvery border (pictured) were produced in 2009, and also included the two epic archetypes.

Please note that there are two versions of this pin set. The 2008 version consisted of fairly normal metal pins but did not include ones for the Arachnos Soldier and Arachnos Widow archetypes. Nicer metal ones with two-prong backs and a silvery border (pictured) were produced in 2009, and also included the two epic archetypes.

A button based on an advertising skit done by RoosterTeeth for Paragon Studios to promote the Architect Edition of the game. Given away at NCsoft convention booths in 2009 and 2010 and sold at Hero Cons for $4 each.

PC Gamer #112, July, 2003. Includes a six-page preview of City of Heroes, including background information on how development began, the massive mechanics overhaul that took place in early 2003, and some of the planned and hoped-for features to be added after release. 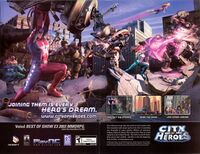 Computer Gaming World #253, July/August, 2005. Includes a ten-page preview of City of Villains, including briefs on new signature characters, zones, archetypes, PVP, supergroup bases, and background material from Jack Emmert and Zeb Cook. Also features a brief Q&A with comic writer Mark Waid; side notes about City of Heroes HeroClix, the tabletop RPG, the collectible card game, and novels; and a demo disc with cinematic trailers and a trial version of City of Heroes.

PC Gamer Magazine #141, October, 2005. The DVD-ROM Edition of this issue contains a 21-day trial of City of Heroes, plus the trailer for City of Villains. Trial code is printed in the magazine, and includes entry in the City of Villains "Golden Ticket" Beta Contest.

Bumper stickers with various CoH-related phrases. Available ones are "I'm Not a Real Hero, but I Play One Online," "Where Heroes Come to Life," "Unleash the Hero Within," "I'd Rather Be Fighting Villains!" and "Evil Doesn't Sleep, Why Should You?"

Pint glasses featuring the hero and villain logos. These glass cups were available at NCsoft convention booths for $5.00 each starting in 2009.

Eight limited-edition HeroClix figures were released with special boxed versions of the City of Heroes and City of Villains games.

A hand-painted resin statue that stands at a height of 23cm. These statues were available from the EU store, but were only seen in America in background sections of developer office photos and a single one that was sold on eBay as part of a 2007 winter charity event. PlayNC EU Store price: £29.99 / €44.99

This Razer Sphex desktop skin was produced as a bonus item for pre-ordering Going Rogue at North American GameStop stores.

Pen-shaped LED flashlights with built-in filters that projected either the hero or villain logo on walls or other flat surfaces. Introduced during the 2009 convention and priced at $8.00 each, they returned in 2010 and were also distributed with most major official contests since their introduction.

This sticker sheet featured the signature characters from City of Villains and was distributed as a promotional item before the game's release.

One version has CoH logos. Available only at the PlayNC EU store.