City of Heroes is a comic book series that takes place in the City of Heroes universe, mainly in Paragon City. The series deals with various characters from the game. Originally, North American subscribers of the game would get the comic book monthly as part of the subscription rate. Later, a monthly fee of $1.99 was charged for North American subscribers that wanted to receive the comic in the mail.

The comics also tied into the game's plot development at times, as well as featuring a section devoted to fan art, fan fiction, and other miscellany in the back. At times, this rear section has also included comic strips by Scott Kurtz of the "PvP" webcomic and Tim Buckley of the "Ctrl Alt Del" webcomic.

As of City of Villains launch, the free comic book deal switched from being an actual comic book being mailed to you to being able to access all existing CoH comic books on the company's website. It's believed Cryptic did this not only to compensate for the lack of additional monthly fees for playing both CoH and CoV, but also to solve the problem of comic books getting lost in the mail.

Production of the City of Heroes comics concluded with the 20th issue of the 2nd volume, allowing game developers and NCsoft to focus their attention more on game content and player interaction. 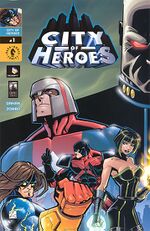 The original promo comic was released by Dark Horse Comics several months before the game launched. It was written by Rick Dakan and drawn by Rick Zombo. This issue included the first appearance of Statesman, War Witch, Apex, and Requiem, who was in the Fifth Column at the time. This issue also included the first and only appearance of Thunderclap as the story followed his adventure in Paragon City. 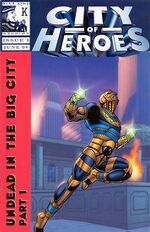 The first normal run of the comic book was by Blue King Studios which covered twelve issues from May 2004 through April 2005. It was written by Rick Dakan, art was by Brandon McKinney and coloring was by Moose Bauman. The series followed the story of War Witch, Apex and Horus as they faced off against in-game villain groups such as the Vahzilok, Carnival of Shadows, Council, and Crey.

Even as the terrific trio faced off against villains, they also had to deal with their personal lives as well. Throughout the 12 issues, a romance between roommates Apex and War Witch was alluded to and (tragically) confirmed by the end of Issue 12. Horus struggled with learning about his past and true nature, and all three were plagued by Apex’s bothersome and frivolous sister, who moved in with Apex and War Witch mid-series.

War Witch was introduced in Issue 5 as a trainer located in Croatoa. There, she appears as a ghost. When Pocket D was revised in February 2006, War Witch was also added yet again as an NPC stationary character who would randomly talk to passing Heroes or Villains. In Issue 13, the Pocket D War Witch was converted into a trainer.

Apex will be making his debut in Issue 19 in the Rikti War Zone as a Task Force organizer with his own Apex Task Force.

Horus currently does not appear in the game.

The Secret Admirer Badge is associated with the Blue King Studio Series and is located outside of the in-game apartment building in Steel Canyon said to have been the place of residence for Apex and War Witch during the series. 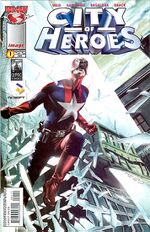 Top Cow Productions[1] took over the City of Heroes comics in May of 2005 as a second volume starting with Issue 1. The focus this time was mostly on the signature heroes in the game which comprised the Freedom Phalanx and the Vindicators and their daily struggles to protect Paragon City. The comic ended with Issue #20. Because the comics dealt more with signature heroes and villains, this series was able to provide much more insight and back story for several characters and areas of the game vs. the first series.

Top Cow employed a number of writers and artists to work on the second series. Mark Waid penned the first three issues while newcomer David Nakayama provided the artwork. Troy Hickman then contributed the “Smoke and Mirrors” three-issue arc, that was followed up by Dan Jurgens’ three-issue “Bloodlines” story arc.

Top Cow’s version of the comics were the first to include new City of Villains content, and with Lord Recluse and his Arachnos minions making regular appearances. Notable villains included Ghost Widow and Kalinda. Several other villain groups were included as well.

As part of the Veteran Rewards Program, the covers of several of the Top Cow series of comics are included as personal items that can be displayed in group bases as wall decorations. This reward is available to players who have had a CoX account for 24 months and have earned the Devoted Badge.

Several storylines that had formerly only appeared in the comics appear as Task Forces from Ouroboros Menders. In some cases there are only minor variations from the comic book plot, while in others the course of events can be drastically altered.

One of the more notable cameo appearances in the Top Cow series was War Witch, who appeared in two issues, one of which gave her some minor dialogue with one of the signature heroes. Also, some issues featured panels that included actual Player Characters from the game, penciled in to give the reader the impression that Paragon City was indeed a city of heroes. 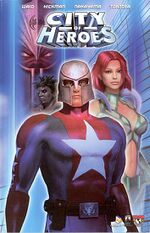 A trade paperback volume was printed in November, 2005, which collected Issues 1-6 of the regular Top Cow series. It also included the "City of Villains" backup story from Issue 6, "A Short Story" featuring Morgan Le Fey, and bonus materials including a cover gallery and sketches and concept artwork.