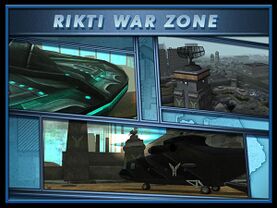 The Rikti War Zone is a co-op Trial Zone, known as the Rikti Crash Site prior to Issue 10. Before the Rikti ship crashed here, this area was known as White Plains. Prior to Issue 16, a hero or villain needed to be Security/Threat Level 35 to enter.

By joining Vanguard you will earn Vanguard Merits for defeating Rikti as well as completing missions for Vanguard. These Merits can be used to craft Vanguard Costume Pieces, Vanguard Temporary Powers, as well as some other items. The Vanguard Crafting Table for crafting these costume pieces and temp powers are located in the Vanguard base.

You have arrived in the Rikti War Zone, which is the first area to be considered a 'war zone'. It is aptly titled due to the ongoing hostilities between the Rikti and, well, pretty much everyone else. Vanguard has stepped in and has called upon Heroes and even Villains to fight against this ongoing threat. There's some crazy stuff going on here so if you're faint-hearted, best not leave this compound.
See my report for more information. It should give you an idea what to expect:
RECONNAISSANCE REPORT
*** Approved Use Only ***
History: Formerly known as White Plains, this was once an urban financial and commerce center, but the area was decimated by the downing of a mammoth Rikti space craft. During the protracted battle to destroy the ship, a fort and personnel facilities were constructed. Over the last few years, the Vanguard have moved in, established their underground base, and continue the fight against the Rikti. The Rikti have erected pylons across the zone, which serve as a communication and security device.
Hostiles Strength: Levels 35 through 54
Suggested Squad Parameters: 3 to 8-person teams
Highlights:

Seek out Lady Grey to form a Task Force in an effort to keep the Rikti threat contained.

The ship has a shield that protects it via signals from the Pylons.

You have entered the Vanguard base where all your efforts will now go towards fighting the Rikti. The Vanguard and your natural enemies are now your allies.

You have managed to get into the Crey base of operations. Nice work. Now how do you plan to get out?

Rikti's continuous attacks on this hospital prompted Paragon City officials to shut it down.

The Council have taken over this building as their base of operations. You might want to check your back.

This is the base Malta likes to call home. Your name wasn't exactly on the welcome mat.

The Devouring Earth have chosen this spot to start bringing paradise back to a war-torn city.

This is where some military vehicles went to die.

If you've made it onto the Rikti Ship, under the defensive shields, you're either very brave or.....

The following additional plaques are currently not associated with any known history badge:

You have worked closely with Vanguard helping to eliminate the Rikti threat earning you the Vanguard Recruit Day Job. Logging out in the Vanguard Base will earn you a bonus to the number of Vanguard Merits you receive, when you log back in, each time you complete a mission for a short time.

The entire zone is a Vanguard Recruit day job location, except for the following specific locations.

The entrances are inside buildings near Vanguard representatives and marked on the map with a white circle with a black V in it.

Arachnos troops can be found near the Vanguard base, at the neighborhoods of The Bulge and Pavia. Despite Lord Recluse's agreement with the Vanguard, the Arachnos troops will be as hostile as usual towards heroes and villains (and even to the Vanguard). Many groups include bosses, especially Crab Spider Webmasters and Tarantula Queens.
The good news are that Mu Guardians and Toxic Tarantulas (both count for badges) spawn (rarely) in this zone.

The Circle of Thorns can only be found at one Spawn Point in the neighborhood of Pavia. They generally appear as a large mob of minions. Bosses and lieutenants appear to be more rare.

The Council controls the neighborhood of Pork Chop Hill. Cor Leonis troops patrol all over the neighborhood and can be found in full squads, including Archons. Darkwolves spawn in the area as well, apparently at night. If you are looking for Ascendants, they will spawn too, but only at the rooftops.

Crey has a base in the area and its scientists, men in black and armored troops can be seen at the neighborhoods of The Bulge and Pavia. Minions and Lieutenants can be usually found in pairs and sometimes in big groups. Paragon Protectors can also be found on the map, usually of a higher level than the other Crey Minions and Lieutenants.

Devouring Earth has taken residence in the neighborhood of Bloody Lane, in an area with spires that reminds of the Hive in Eden. They are usually found in small groups, but Greater Devoureds spawn in the zone. They are hostile apparently to any other groups.

Knives of Artemis seem to share the zone controlled by Malta with them. They are usually found in pairs, but you can find sometimes a full squad of them, including Hands of Artemis.

Malta Group Operatives aren't hard to find at all. From lone soldiers to full squads, this villain group has a strong presence in the central part of the map. The neighborhood of Little Round Top is infested with them, and they are relatively common to see at the ridges of the Sunken Road. Gunslingers (both Lieutenant and Boss versions) are very common. Titans may spawn as well.

Nemesis is a minor faction in this zone, and may be troublesome to find when Borea asks you to fight them. They can be found sometimes in the Sunken Road, including (rarely) lone snipers. It's much easier to find them in Heartbreak Ridge, near the Lovers Point plaque, sometimes in full squads. Warhulks are rare to find there but possible too. Beware of the nearby Rikti Pylons!

Rikti can be found all over the zone. The closer you are to the downed ship, the higher in level they will be. Full squads of them including almost every type of mob in the group can be found in this zone. Rikti monkeys infest everything, especially rooftops. The troops close to the downed ship may be as high as level 54. Valiant souls may find there Heavy Armor Suits as well. They are hostile to all other groups and will fight them if they come too close, especially the Vanguard. Beware of the Rikti Pylons, which have a great radius of aggro and can pierce through Invisibility, making navigation difficult.

The Vanguard can be found all over the zone, usually at equal or higher levels than near enemy mobs. In the Vanguard Compound, the Vanguard con at level 54, making enemy raids by the attacking Rikti virtually useless. They con as Ally to both Heroes and Villains, but as they are a neutral group in the zone, they will not directly aid either side, but will join in fights against enemy mobs if they stray too close.

Longbow is a minor power in this zone. In the neighborhoods of The Bulge and Pavia you can find lone chasers patrolling, and also some soldiers can be seen in Vanguard bunkers or rarely near the downed ship fighting the Rikti. They con as Ally to Heroes as well as, oddly enough, Villains, and will fight against any enemy villain groups.

The Paragon Police Department can be found only in the Crash Site, though there are usually two level 54s guarding a door in the main Vanguard base area. Power Armored officers and drones can be seen, but it's usually Awakened troops what you can find more commonly. They con as Ally to Heroes and (oddly) Villains.

Turrets can be found all over the zone, usually at equal or higher levels than near enemy mobs. In the Vanguard Compound, turrets con at level 54, making mincemeat of the attacking Rikti who attempt to penetrate the base. Turrets con as Ally to both Heroes and Villains, and will not attack them. However, any enemy mobs within aggro range of the turrets will be fired upon.