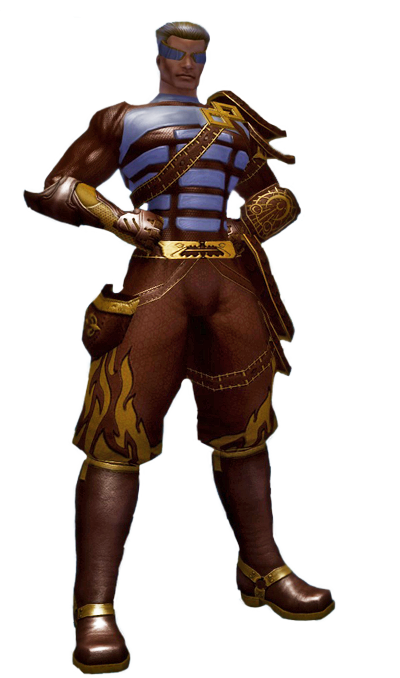 Mender Ramiel appeared in a flash, kneeling on the Ouroboros platform. His armor was damaged and his clothing torn. Smoke and chill permeated the air. He was weak, but determined. He looked up and saw Mender Lazarus peering at him.

"This is my first time this far back, fool," spat Mender Ramiel. "You always are mixing your continuities."

Ramiel stood up, and strode confidently into the Citadel of Ice and Flame. Mender Tesseract and Twilight's Son acknowledged his presence, but knew better than to begin a conversation. Ramiel walked out to the back balcony and stood before the leader of Ouroboros, Mender Silos.

Silos looked him up and down. "Ramiel, I never expected to see you this far back. Are we not beyond your tether?"

"That is one implication, yes," said Ramiel.

"What news do you bring us? Has the Storm been averted?" asked Silos. His voice was tinged with hopeful anticipation.

"Not entirely, but there has been some . . . ." Ramiel was choosing his words carefully. "Your efforts here in the early 21st century are having an effect."

"Is a myth," interrupted Silos.

"No, it's real. I've seen its effects myself," corrected Ramiel.

"I was sent here as a harbinger. This is the exact time period when it all changes. I believe that the super-powered beings you have traipsing through time are having a profound effect."

"As you know, the first modern super-powered beings were Statesman and Lord Recluse. After drinking from the Well, which they tapped into via the Fountain of Zeus, they became Incarnates of Zeus and Tartarus. These Incarnates were the two most powerful people on the planet up until now."

"Several things are incorrect about that statement, but go on," said Silos.

Ramiel glared. He had important information for Mender Silos, but like always, Silos thought he knew more than everyone.

"As I was saying, the Well of Furies seems to have awakened once more. It will seek out the most powerful individuals and grant them new powers and new abilities," Ramiel declared.

"What are the implications?" asked Silos.

"Statesman and Lord Recluse will not be the only ones possessing Incarnate abilities. The most powerful individuals from this point forward will struggle to unlock their inner Incarnate and discover new powers. These new Incarnates have affected the Storm, but we of Ouroboros may have created a different threat through our efforts."

"You can't mean Arachnos?" asked Mender Silos. Apparently, this was a concern of his that had leapt to mind immediately.

"No," said Ramiel. "Something you will find difficult to foresee in this timeline, because it is not from this timeline," Ramiel smugly declared.

Mender Silos thought for literally a second. It was a hundred times longer than he needed.

"So the prophecy is coming to pass?" asked Silos.

"If that is how you would interpret the prophecy, then yes."

"As the tempest dies, so the lightning shatters the mirror, and as the storm skies clear, the reflective shards cut and bleed those who handle them," intoned Silos.

"Yes, I know the prophecy. You made us memorize it, remember?" gritted Ramiel.

"Yet here we are. Alternate dimensions will begin wreaking havoc on this one, spoiling any victory we could ask for over the Coming Storm."

"I hope you have a plan, Silos," said Ramiel.

"Always. We can recruit allies within these parallel worlds, and perhaps bolster our own numbers with alternate versions of super-powered beings, or even alternate Ouroboroses."

"Do not fool yourself into thinking that alternate Ouroboroses will be as benevolent as this one. They could be led by an insane version of yourself for all we know," warned Ramiel.

"While you ponder, Silos, I have a favor to repay. Excuse me for a moment," said Ramiel.